WARNING: This post contains plot spoilers. If you haven’t yet seen Star Wars: Episode VII: The Force Awakens, please do so now, and then report back here to discuss.

WARNING II: This review contains lots of details of The Force Awakens without full explanation because I’m assuming you have heeded the WARNING above, and have now seen the movie once or thrice such that you’ll be able to follow the details.

And now, without further a Dooku:

To bookend my nostalgia-aided anticipation of Star Wars Episode VII: The Force Awakens, it’s time to decide what I thought of it. 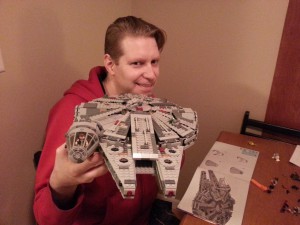 I think The Force Awakens is both brilliant and disappointing. It respects the humorous yet earnest tone of the originals. It divides its time well between storytelling and action. And there are many delightful new characters ready to fill our action figure collections. Most significantly, I’ve had a great time in my trilogy of viewings, and in each instance I’ve noticed something I didn’t in the first attempt.

So, if The Force Awakens were the first-ever Star Wars, I would mark it down as a ten and buy my ticket to a fourth big screening with a giddy smile on my face.

However, Episode VII cannot be measured only by its own excellence; it must also be checked for its ability to contribute to the saga that brought it. And that is where I am a smidge frustrated.

(Before I list my complaints, I offer two caveats. (1) I still loved the movie, and will support its sequel efforts with all my force. (2) I would be delighted if any of my quibbles were proven wrong in future episodes.)

(I) THE DARK SIDE NEVER SLEEPS:

Some have said that, by copying the plot structure of Episode IV: A New Hope, Episode VII was pandering to nostalgi-addicts like myself. I think the opposite. To my obsessive fancy, the best way to honour Star Wars fanaticism would have been to continue the story that came before. That is, Episodes I-VI gave us an account of how the dark side rose and then fell from power. But, by reinstalling the same scenario of the dark side dominating with an oppressive regime at the start of this film, I felt as if those first six movies did not have a significant effect on the structure of our current galaxy.

I don’t object to the dark side rising again (if not, “it’s gonna be a real short trip”), but I would have preferred this movie to be more about how it re-rose. Instead of starting with a Darth Vader II (Kylo Ren) and an Emperor II (Supreme Leader Snoke) already back in the same dominating dark places that they were in Episodes IV-VI, I would have loved to see the new dark leaders slowly undermining our victory in Episode VI: Return of the Jedi.

As it was, it seems to me that director/co-writer JJ Abrams, along with co-writers Lawrence Kasdan and Michael Arndt, are essentially saying, “We’re gonna start all over, fanboys!”

That worked for Abrams’s other epic directorial commission, Star Trek, since that starry adventure has long been a multi-version universe. However, I don’t think such rebooting fits for Star Wars which has always been a continuing saga). Maz Kanata’s (Yoda II’s) explanation that evil regimes always dominate in some form (from the Sith to the Empire to now, The First Order) didn’t satisfy me. If the dark side taking over is inevitable, does any of this matter?

(Nevertheless, I repeat my willingness to apologize for these complaints if the future movies and stories illuminate what I’m missing.)

The choice to send Han Solo to another universe was understandable (and I think the decision matched the original vision of George Lucas who, in his director’s commentary for the classic trilogy, talked about his preference for killing experienced heroes—such as Obi-Wan Kenobi and Yoda—so that new ones could get their own John Williams theme). And I thought that Solo’s death by his son’s (Kylo Ren’s) dark sword was a brilliant inversal of Luke saving his father from darkness. So I think the decision made good dramatic sense (and certainly the scene in which our Solo hearts were broken was wonderfully rendered), but I wish they could have picked someone other than the best character in the saga to sacrifice to such a noble dramatic cause. With all due respect to Princess Leia (and Carrie Fisher), I don’t think she has the charisma of her man, so she could have supplied all the dramatic significance of Kylo Ren killing a parent without us losing the guy who once brilliantly told Chewie to “Fly casual.”

But again, from my couch, it seems that J.J. Abrams wants to remind us that the old guard is to be moved out of the way.

Reformed stormtrooper, Finn, was a great character on his own, but to my psychological eye, his behaviours didn’t match what I would expect from someone who had spent his life being brainwashed at Stormtrooper Productions. I think Abrams et al lost a humour opportunity there wherein Finn might have felt a need to ask for orders at inconvenient times.

Instead, Finn transformed from (A) being part of a brainwashed class who always had to follow orders to (B) being constantly delightful and ready to go his own way. There was little reference to any psychological consequences of what he’d been through (except his general fear of the First Order from whom he had escaped).

Nevertheless, for his charismatic and humourous talents, I like Finn as Han Solo II.

I’m confused by why Finn, a force-free fellow, did so well in a light-saber fight with force-wielding Kylo Ren. I recognize that Ren was injured, and that he still defeated Finn reasonably quickly. Nevertheless, Ren seems to have powers with the force that are pretty close to his grandDarth, Vader. In the original six episodes, I don’t recall any forceless foes troubling Jedi or Sith-level force artisans.

Similarly, I thought Luke Skywalker II (future Jedi, Rey) seemed too powerful too quickly in her uptake of the ways of the force such that she was able to defeat Kylo Ren. Again, I realize Ren was injured, but he’s also been trained in the force by Luke Skywalker and Supreme Leader Snoke. Rey, meanwhile, seems to have had no training, and is relying only on her intuitive sense of how the force works. Indeed, without a single lesson on letting the force flow through her, she may already be most the skilled Jedi since Yoda.

It’s been pointed out to me that Rey has likely got some impressive Jedi genetics roaming around her. I agree, but so did Luke Skywalker, and he wasn’t instantly infallible when he first realized he could deliver his own pizza without leaving the house.

(SETHBLOGS’ UPDATE: Reading some of the blogs about this movie—which I’ve now seen four times—they point out that, in her flashback to being orphaned on Jakku as a tiny girl, Rey was wearing traditional padawan garments, meaning she might have had some Jedi training, after all. I’m still confused about how that would explain her ability to go lightsaber to lightsaber with Ren, who’s training was not interrupted in childhood, but I think the point does have the potential to undermine my quibble there.)

Nevertheless, I enjoyed the banter of Finn and Rey, and I’m happy to have them be my new heroes. And, once again, I would be delighted to be proven wrong on all of the above criticisms via the details that will entertain us in future episodes.

(To that end, there’s a funny, albeit crusty criticism of killjoy criticisms of The Force Awakens by Matty Granger. Perhaps his arguments are sufficient to undermine my concerns, but I’m not satisfied yet.)

May the next Episodes prove me wrong. 🙂