As someone who has been resistant to the omni-tentacled powers of social media, I am pleased with myself for noticing something that social media does with more audience consideration than mainstream media.

As with all topics, this one can be best understood by travelling far, far away and backwards in time to the Star Wars galaxy. I recently watched a documentary, Rogue 1: A Star Wars Story, which examines the events just before the historical time period of Star Wars, Episode IV, A New Hope. 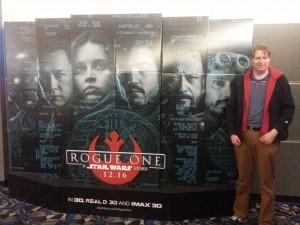 Worry not, I am aware that these characters are living in a fictional galaxy, but I jest because I am obsessed. I adore my Star Wars, so when new episodes arrive to fill in gaps in my favourite patch of fictional history, I am as excited as a Sith lord finding a new apprentice.

But there is one tiny chink in my Darth Vader armour: the movie reviewers that I observe in mainstream media are often disrespectful of movies, such as these, that are meant to entertain.

(First) as I’ve discussed before, many reviewers are only capable of appreciating films that match their deep and dark genre sensibilities. If you’re not depressed or confused by the end of a screening, they’re not loving it. Consequently, they fail their movie reviewing duties because not all of us go to the cinema solely to cry and deconstruct opaque symbolism. There are other genres we like to imbibe, and many reviewers are unwilling to examine those movies’ abilities to live up to their genre requirements.

For instance, if I’m looking to see an action film, and my reviewer treats Die Hard (an obviously brilliant offering in its category) and The Matrix (not so much) as equally “brainless collections of violence, stunts, and special effects,” then they will not have aided me in selecting between the two.

(Second) and more importantly in this case (since I do not need a critic’s help to inspire me to see Star Wars), many of the mainstream reviewers, with whom I have a begrudging one-sided relationship, have an annoying a penchant for spoiling the movies they discuss by giving away too much plot in their critiques. As in my first criticism, I think the leading causes of this aggravating habit are that the reviewers are arrogant and inconsiderate. Notice that, as they babble freely about the plots they’re exposing, they enunciate their unwelcome delivery with a patronizing tone of voice that implies:

This condescending inconsideration is amplified by the reviewers’ distance from their audience. When my Friday afternoon movie reviewer, Katherine Monk, gives away too much of a movie in her reviews on CBC Radio, she is not aware of me yanking my head phones out of my ears to protect myself.

In contrast, then, after a trilogy of viewings of Rogue 1—which is a fantastic companion to A New Hope, and a superior installment, in my opinion, to its most recent rival, the pleasing, but troubled Episode VII: The Force Awakens—I craved more contemplations than my own about the new addition to the family. And, while I no longer had to fear the spoiling tendencies of the mainstream media, I was also aware that they were not going to consider my hobby with the nuance I was seeking. Therefore, I cranked up my internet, and dove into the wild space of youtube, where I was greeted by individual and group conversations, featuring humour, intelligence, and appreciation for the subject.

These youtubers were reviewing this Rogue 1 movie because they loved the Star Wars franchise, and even if they didn’t positively perceive this Star Wars story and collection of characters as much as I did, they had gone into the film—quite in contrast with our mainstream movie rebukers—hoping to like it. As a result, where it failed to delight them, I was open to their critiques because they hadn’t treated the movie as intrinsically irredeemable before they’d starting watching it.

Now, I had visited in youtube before, so I should acknowledge that I reviewed these reviews anticipating this level of respect. However, what I wasn’t expecting was that every youtube reviewer that I surfed upon expressed concern about spoiling the movie for their audience, and so offered both a “non-spoiler” and a “spoiler” analysis of the film. In the latter service, every youtuber that I encountered reminded their audience at least twice that they were about to unleash vital plot details, so, if the viewer hadn’t yet seen the movie, they were invited to leave then or forever hold their complaints.

I assume that this sort of consideration was motivated initially by the democratic nature of youtube, wherein one starts with a tiny audience, which one can diminish or increase rapidly with every right or wrong turn of phrase. Regardless, the result is that such respect-for-audience has for now become a feature of youtube culture: even the large, popular youtube channels that I took in offer this same spoiler protection service.

While youtube has its vices (I advise you to never read the comments: the many anti-social creatures who ply their crassness there will leave your belief in humanity scarred), this fantastic, spoil-resistant result has me pleased with the you-niverse. They have achieved a compassion for their audience that many mainstream reviewers have not even sought. In short, they have gone Rogue, and I like it.