To my fellow narcissists: Five ways to keep your #narcissism at bay during these quarantimes (based on the recent real-life adventures of ME, Seth McDonough—soon-to-be famous author):

When you’re a group of two or more walking on the sidewalk and you see a stranger or two coming towards you, you might notice that they’ll usually veer tightly to one side of the sidewalk (or even off the sidewalk) in preparation for the upcoming crossing of your group. Strangely, that doesn’t mean they’re deferring to the grandeur of you and your party. Instead, it more likely suggests that they’re hoping you will simultaneously switch to single file on your side of the sidewalk, too, so that you’ll all have a friendly but non-cuddling interaction.

When you go to the grocery store, and you see someone is considering their options for a can of soup, I suggest not sneaking yourself into the small space between them and the shelves to pick your favourite before they do. Patience, my friends!

When you go to the local park that’s still open for you to get some socially distant exercise, and there’s a prime path that people are using for that purpose, maybe don’t congregate your friends and family in one of the bottlenecks of the trail to chat and/or play with your little ones.

HINT: That one’s good practice during non-quarantimes, too.

When you’re in a video conference, and a co-worker attempts to make a case for something using language that does not match the pre-packaged buzz-wording that you would prefer, it’s okay to let them finish their thought without correction.*

* For similar instance, I submit that the following correction that I witnessed was unnecessary:

“Hold on, Betty, before we get into what we should do and who does what, I think we need to discuss the important distinction between ‘co-worker’ and ‘coworker’ at length.”

During the new 7pm tradition of people cheering from their balconies for front-line workers, if you happen to be out on a walk at that time, I submit it would be best not to wave and take a bow under your assumption that the cheering is in honour of your recent book launch. (Okay, that one may have been just ME.) 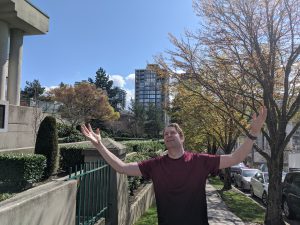 2 thoughts on “FIVE QUARAN-TIPS FOR NARCISSISTS”