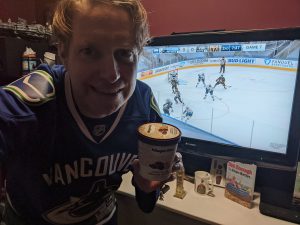 As the new hockey season (and so the post-game interview season) arrives, it is important to refresh our understanding of hockey players’ special metaphorical math in regard to percentages. In standard, boring old mathematics, that is, “percentage” is up to a maximum of 100, but hockey players (as well as other athletes) use an alternate system known as “emphasis percentage.”

You see, in reality, it’s actually quite difficult to always give 100% effort (that’s a sure way to burn one’s self out), but nor is it very safe to admit to the picky journalists that one gave, say, 80% on a given night. Thus, a special alternate system of percentage was invented just for athletes and motivational speakers. Emphasis percentage works exactly like regular percentage, except that, instead of counting the number of points within a 100, E% has a maximum total of 150.

Thus, after a game, an athlete can happily, and honestly, state that they put in “120%,” which looks great for emphasizing that they tried really hard, but doesn’t provoke nit-picky questions from reporters about why they didn’t give their maximum.

If you’re curious, however, to know what an athlete actually put forth, just remember the exchange rate from E% to regular % is .67. If in doubt, here’s a handy chart:

If, however, you ever hear someone claim that they gave 200%, don’t believe them: it’s impossible.

P.S. Of course, not everyone agrees with my assessment of hockey percentages:

P.P.S. Also, to further prepare you for the hockey cliche season, consider this: