In the interest of full disclosure—and Seth-promotion—the spirt of this rant, and other works of Sethiquette, is now available in my book, How to Cure Yourself of Narcissism. 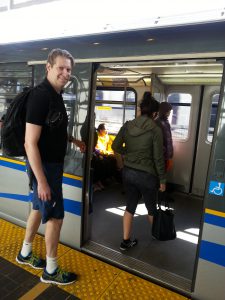 In opposition to my recent rants (SPACE ON BUS; SPACE ON BRAIN & MY FIRST LINEUP) regarding bus passenger selfishness, I challenge me to consider this incident:

After finishing work in the late evening on Sunday, I landed outside on the street with my usual walk-and-look-for-the-bus plan. The walk would be a simple 15 minute trek to the nearest Skytrain that would take me home, but if, on this walk, I happened to pass a bus stop at the same time as bus, I would happily hop aboard to save myself up to 10 minutes of commute.

When, then, I spotted a bus dropping off a passenger at a stop that was just 50 yards ahead of me, I decided to make a run for the oversized van (in case it was slowed down by more exiting passengers), but my sprint was not a desperate one since I was content with my leg-powered transporation.

As I ran, the passenger that was just jettisoned from the vehicle spotted my approach, and so pointed at the bus to ask if I was aiming for it. I nodded, and so, with no thought of why she should care about a stranger’s goals, she knocked on the outside of the bus to indicate a passenger was coming. To honour her effort, I sped up my pace, but the bus pressed forward just as I arrived.

I was not wounded by the loss since (A) I didn’t feel the driver was obligated to the knocking-instructions of a former passenger and (B) I was still content walking. But I was touched by the efforts and concern of the stranger, who, in turn, shook her head with disgust at the departing bus.

I assured her I was content walking, but I thanked her for her kindness – not many would look out for a stranger like that. This did not cheer her up, but it did me.