I gathered recently with some friends and siblings for what I thought would be some wholesome family fun.  Unfortunately, someone challenged us all to a strange word game, titled Bananagrams, wherein each contestant is given letters from which to try create a full crossword faster than their opponents. 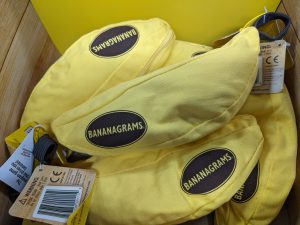 Quickly, it was noticed by me that I was slower than my rivals (generally I was just finishing sorting the letters into alphabetical order when the others were completing the grueling task).  Thus, I suggested that I be given some sort of handicap to make things more fair.

“How about,” a creative participant suggested, “everyone but Seth has to get at least one dirty word in their crossword.”

This was accepted and the group set to the lewd chore.

Several moments into the noble endeavour, one of my sisters—for no apparent reason—announced, “I have sex!”

“Okay, then,” I replied, “thanks for letting us know, but for now, can we concentrate on the game?”

My sister tried to cover up her inappropriate announcement by explaining she’d found the word “sex” in her letters, but we knew she was just embarrassed, so—to make her feel better—we spent the rest of the evening sharing made-up sins of our own. Some announced that they read dirty magazines; others were voyeurs; and most of us liked S&M. 2 thoughts on “THE REVEALING LETTERS”