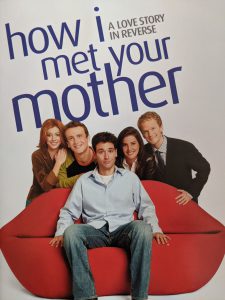 A mere decade after my initial post, HOW I MET YOUR INDEPENDENT HUMOUR regarding the 2005-2014 sitcom, How I Met Your Mother, I have finally completed my witnessing of this most creative of television comedies.

Against SethBlogs’ standard procedures, my updated review must begin with some contrition. You see, in that first analysis, I brashly noted that the premise of the show (a dad in 2030 telling his two kids about how he met their mother somewhere between the years of 2005 and we didn’t yet know when) was likely too daunting to sustain coherently.

“…the premise is a wee bit troubled: the idea of dedicating a plot to explaining to one’s future children how one discovered their mom is nice, I think, for a defined timeline such as a movie, but in the case of an open-ended TV series, it seems too difficult for the writers to keep each episode on point considering they don’t know when exactly to bring the mother in, and so in turn, they don’t know how exactly to relate each show to her eventual arrival.”

I can now report that—while I was perfectly right that the challenge the writers had set for themselves was “difficult” (well done, SethBlogs!)—I was wrong to suggest it was “too” much so (badly done, SethBlogs!). As it turned out, our writers were not toiling in the linear boundaries that most television writers reside. Instead, the authors of HIMYM were working in the realm of literary novelists where time, place, and perspective were free to wander outside the lines of sequential thinking. Yet, unlike their literary forewriters, the HIMYM creators had a sense of humour about both the lives of their characters, and about themselves, as they often pranked their future selves by having the dad-narrator reference peculiar future incidents which they would somehow have to finagle into later seasons.

The nine-year show is bursting with successful payoffs (as it high-fives those ideas prognosticated in past seasons) as well as retroactive payoffs (as it explains previous behaviours that we didn’t realize were mysterious at the time).

But this show is not just a non-linear story where jokes can be told out of order: instead, How I Met Your Mother is a collage of collages. Each season tends to live in a particular year between 2005 and 2014, but because our narrator’s memory is not limited by temporal rules, stories are bound more often by theme than by time. So, if an episode is about a particular bad habit of one of the characters, we’ll receive examples that might exist anywhere along the 50-year timeline of the show.

Perspective, too, is a mosaic on How I Met Your Mother. Along with the dad, guest narrators grab the microphone occasionally to tell the story of the episode, and the explanation for the alternative viewpoint is often as interesting as the plot, itself.

These collages of perspective and timeline work alongside the series-long arc of meeting Mom as we get many foggy hints about her, even though we don’t officially see her face until the end of the penultimate season. And, when the writers finally do let us meet Mom, they still aren’t beholden to our linear expectations: in fact, they first introduce our lead couple together later in the timeline than their long-anticipated first encounter, and so we actually get to know them as a duo before they “meet.”

The finale on the How I Met Your Mother timeline has—at this point in our real-world timeline—not been as popular as the show, itself. However, as with perhaps the greatest movie of all time, The Empire Strikes Back, which might have been titled, How I Met My Father, and which initially did not receive a positive critical reaction (unlike its precursor, Star Wars), I predict that our perspective will eventually shift in regard to HIMYM’s conclusion. While (semi-spoiler alert) the ending contains a twist on our expectations—and I admit that I, too, was miffed about it for an hour after watching—I now contest that it beautifully ties together an unspoken promise: it tells us why we’re being told the story. And that information, I predict, will change our future viewings of the show to being more meaningful than we’d realized.

Please don’t misunderstand my gushing: HIMYM is not a perfect show, and it has some dud episodes (even masters of situation comedy, such as Seinfeld, Frasier, and Jane Austen lose their way on occasion). Nevertheless, How I Met Your Mother is perhaps the most inventive sitcom I have ever met. Plus SethBlogs did get another thing right in my previous description: the show has lots of clever turns of dialogue. (Well spotted, Sethblogs!)

4 thoughts on “HOW I MET YOUR INDEPENDENT DESIGN”