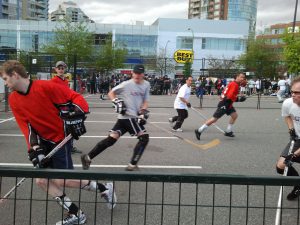 As we gather around our televisions to witness the Vancouver Canucks vs. the Boston Bruins in the 2011 Stanley Cup Finals, we will hear—with increasing frequency—about the beauty and honour that the referees could bestow on the game if only they would “let the players play!” I couldn’t agree nor disagree more.

By “letting them play,” Canada’s leading alpha human and CBC commentator, Don Cherry—amongst many other hockey aggression protectors—means that the NHL referees should, as much as possible, keep their whistles out of the games and not call so many penalties. To his way of thinking, such red tape disrupts the players’ ability to decide the contests via their own grit and determination.

Cherry apparently sees hockey as a test of heart and aggression, so that—when one player “illegally” fouls another in the joyful pursuit of that great good—the referee should most of the time ignore the infraction so as not to stunt the beauty of the battle.

After all, if a player crosses a line in the rules while seeking his gritty dream, and we punish him for it with a sanction that could hurt his team, then we will force the player to pull back his heart-felt play to avoid further reducing his team’s chances. To the hockey-is-war fan, such restrictions are obscene: the referees’ egos, they claim, are ruining game!

But what about the skill of the game? Some of us come to hockey broadcasts because—along with impressive physical confrontations—we love exquisite stick handling demonstrations and deft passing plays, but every time a grunt athlete illegally obstructs one of our athletic Einsteins, he limits the skill players’ ability to play their game.

Since the early 1990s, when Gretzky and Lemieux roamed the rinks and the goals flowed like Cherry wine, NHL scoring has reduced significantly. In fact, by 2005, the game had become a little dull to many viewers, which provoked the NHL to set up a competition committee to investigate ways to allow the skill players more room to demonstrate their talent.

For instance, one of the many resulting rules is that players in the defensive zone can no longer throw the puck over the sideline glass to stop the play: if they do so—intentionally or not—they will leave their team shorthanded for two minutes. Don Cherry is a leading critic of this rule.

“The players don’t mean to do it,” he has ranted many times.

Instead, he argues, such players are simply trying to get the puck out of danger by banking it high off the side wall, but sometimes they accidentally shoot it too high, and so it goes out of play.

This argument implies, first of all, that the players would never purposely throw the puck out of the play because it would be unsporting. Has Cherry met the NHL mentality?

This is a league made of goalies who are applauded if they can “accidentally” knock their own nets off their moorings so as to stop the play if they think they’re about to be scored on. (“Nice veteran move,” commentators will then cheer, as though winning is an intrinsic good regardless of the rules broken to achieve it). Indeed, in a sport that salutes the motto, “If you’re not cheating, you’re not trying,” of course players would intentionally throw the puck out of play in order to save a goal! They’d tackle their opponent every time they touched the puck if they thought they could get away with it.

Second, now that the league penalizes playing for knocking the puck out of play while on defence, Cherry’s surely right that they’re not doing in on purpose (anymore), but that doesn’t make it an unworthy interjection of rules. Instead, we now have a situation where such players either don’t have sufficient skill to get the puck away from danger without sending it out of play, or the offensive team is doing such an excellent job of pressuring them, that they don’t have time to make a stronger play. Sounds good to me. I don’t see a problem with penalizing a player for unintentionally going out of bounds in their failed attempt to complete a high-risk play. Similarly, I’m sure tennis players don’t mean to hit the net: and yet, when they do, the judge will not let them play through the error because they intended a better shot. Walking the tight rope between a high-skill play and a penalized one requires great skill at great risk. If you don’t have it in you to complete, then don’t try for it.

(In Cherry’s version of the hockey universe, players who lack the skill to keep the puck in play would be rewarded with a reprieve from danger that the higher-skilled players would not receive, and thus sometimes ironically would acquire better results for lesser execution.)

The NHL rules are not perfect (personally, I would like more skill-protecting regulations in place), but the league has improved conditions in recent years for skill players. Whereas previously a defensive player could often get away with holding onto an offensive player’s stick, there is now a specific penalty called “holding the stick” that has, to my hockey eye, reduced the ridiculous behaviour.

(Can you imagine a baseball catcher, upon realizing his opponent is about to have a good swing at a home run, simply reaching out and holding the offensive weapon?) To the Cherry crowd, such penalty calls are petty:

Well, what about the high-skill player who’s trying to create some offence? What’s wrong with letting him play by penalizing those who use illegal methods to stop him?

Officially, the NHL tells us that referees are told that—if they see a penalty—they are supposed to call it regardless of the effect it will have on the game, but, as these playoff games become increasingly significant, the on-ice umpires cannot escape the pressure to stay out of deciding the outcomes of the matches. Thus, when games go into overtime, infractions that would have been called in the early part of the game, seem to be called less often.

This hands-off approach pleases the Cherry-minded who will accuse those refs, who don’t follow the unofficial “Let them play” rule, of tampering with the players’ ability to decide the game for themselves. Their argument implies that gritty—by-any-means-necessary—players are more worthy of determining the results than skill players. But why not give skill a chance, too? Why not let those who possess such talent be unencumbered by the rule-evading specialists?

If we call the penalties according to the line that the league has determined fairly balances skill and grit, then players can by all means decide the outcome within those limits. And let the skill players play.

2 thoughts on ““LET THEM PLAY” CUTS BOTH WAYS”