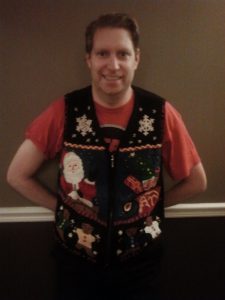 I realize that some environmentalists may have a legitimate beef with our annual holiday upgrade in consuming products, but, aside from that inconvenient gaggle of apocolapse-alerters, I’m not sure why so many seem to talk of resenting the commercial aspect of Christmas.

We live in a world where things come in handy, but at Christmas time, participants don’t look for these items for ourselves (well, we don’t set out to, anyway), but instead we spend time thinking about our favourite people and then trying to find a thing or two that they may not normally buy for themselves, but which they may nevertheless enjoy. And so, various entrepreneurs, big and small, lineup to provide locations for us to set our annual scavenger hunt. I have no quibble with such service with a profit.

I’m told that the results are rather healthy for the economy, too, as retailers apparently can acquire up to 40% of their yearly profit from the pleasin’ season. Given the world’s current financial troubles, maybe that’s a good thing?

Meanwhile, on a social level—where I think the collective Bah-hum-bug crowd is really directing most of their disapproval—I will admit that I find Christmas shopping in the malls to be fun. And I’m someone who hates shopping like being blocked by an escalator-stander!

As I walked through the congested nostrils of the Megatron Mall today, I felt a sense of cultural community: we were all in it together. And in a town where we normally don’t like to look each other in the eye too often, we strangers smiled at each other like we were old friends. In fact, I was even patient with the slow-walkers—apparently late-minute gift-collecting is one habitat in which all speeds of walkers can co-exist peacefully. If there was stress in the air, I didn’t smell it; and if my random acts of smiling were annoying anyone, they didn’t frown so.

So Merry Christmas (Eve) shopping, everyone, and a happy new sneer!