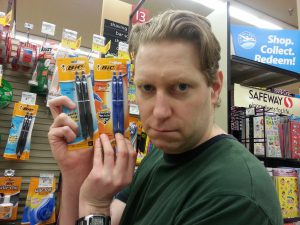 When someone sends a message on Twitter, and they are quoted either by themselves or someone else, the current convention is to say, “X tweeted Y.” Not since the phrase “X xeroxed Y” has a company been so pleased with the public’s use of a corporate verb to express their actions. I think it is time to show some resistance to this portion of Twitter’s master plan to dominate our lexicon.

When someone “tweets” something, they are writing it in the public domain. Thus, if I choose to quote a public figure, is it necessary to say that “Jim Carrey tweeted Y,” or could I not say, “Jim Carrey said/wrote/stated Y”? Is there anything gained by always crediting Twitter when referencing a comment from it?

Until this phenomenon, the branded medium by which people express an idea has not been universally indicated when quoting them. That is not to say that media nouns have never become verbs; sometimes we might say, for rhetorical purposes, that Dickens “penned” a phrase, but not always. And never do we say that Shakespeare “Bic”ed a play or that Austen “Random House”d a novel. I acknowledge that the word “tweeted” gives an audience more information than they would have gained from a simple “said” or “wrote,” but is that extra detail always useful to our understanding?

It seems to me that, when speaking from the first-person perspective, noting for one’s audience that one is quoting a tweet can often be useful. For instance, the phrase, “I said that I will give up alcohol” may mean less than saying, “I tweeted that I will give up alcohol” because the latter tells us that it was a public announcement. (But even then, one could simply state that they made the announcement “on social media” or even “on Twitter.” One doesn’t necessarily have to transform Twitter into the verb of the sentence, which makes the social media outfit an essential component of one’s phrasing).

When journalists are quoting celebrities or academics, however, we can assume that their subject’s statements are public, and therefore, amalgamating the expression with its platform is not as universally necessary as the constant usage implies. Nor does it appear to be consistent with how we refer to other carriers of correspondence. In my estimation, for instance, the press is less likely to identify the medium of communication when discussing non-Twitter statements. For instance, if a politician makes a remark at a press conference, the location of the remark is not always identified, and the phrase “X press conferenced Y” is never used.

(1) narrows our expression (as we seem to be using the verb in any case that it applies, instead of employing the linguistic discretion that we would when referring to statements made in other media), which in turn

(2) harms our language aesthetically, and

On its own, Twitter’s ability to infiltrate our language in this omnipresent way is not going to break the dictionary, but if we don’t resist, then the next global online phenomenon will try to do the same, and soon our sentences will look like a collection of billboards. Ultimately, the phrase “tweeted” may be relevant and informative more of the time than I am estimating here. Currently, however, this is hard to know because we are using the phrase indiscriminately and are thus giving special privilege to Twitter that we do not offer to other communication media.

I’m not anti-capitalist, and so I’m not saying that the word “tweeted” should never be used; but I dislike the product placement in our sentences, and more significantly, I fear that such uncritical language usage is homogenizing our expression.