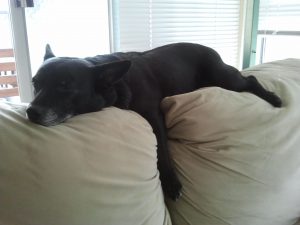 Recently (as the current story goes), an Abbotsford dog walker left six dogs in a vehicle, under the cruel supervision of a hot west coast day, and returned to find them dead from heat stroke. Consequently, she dropped her victims off at a local ditch, and told the police and the owners of the deceased that the animals had been stolen.

This story will cause most compassionate humans to shudder. Along with my own participation in this collective sadness, I’m also troubled by the human-centric language that has arisen from this story on talk radio. Consider the following:

(1) Many people calling themselves dog lovers have phoned in saying that their hearts break for the owners of the dead dogs. I have no objection to such compassion, but I’m perplexed as to why their first concern goes to the animals’ friends and not the animals themselves, the beings who suffered the most.

(2) One of the owners of the animals (along with many radio callers who were imagining what their feelings would have been in the same situation) said that they could have forgiven the dog walker for her mistake if she hadn’t lied about it. This baffles me. Let’s look more closely at the competing crimes:

(A) A professional caretaker neglected her primary duty to ensure the well-being of the animals she promised to watch over, and left them in a dangerous situation to the point that they died suffering.

(B) A professional caretaker realized that she could get in trouble for betraying her duty to her clients, so she lied about it to protect her own hide.

It should be obvious—when comparing these two ethical breaches side by side—that the pain of the animals is far worse than the indignity experienced by the humans who were lied to about it. The crime of neglecting sentient creatures (especially as a professional who surely knows better) is ethically deplorable, as it demonstrates a preference for one’s small convenience over the resultant suffering of creatures under one’s care; in contrast, lying about one’s crime to protect oneself from punishment is at least understandable. Most people—even good people—will do a lot to avoid prosecution, whereas no good person with a patch of compassion would leave animals in a car in the hot sun. I’m not saying that lying to the police, causing vital resources to be wasted, is okay; that was selfish and immoral, and it should be punished by the law; nevertheless, it is understandable, given there was no longer anything she could do for the animals, while her career and reputation was in a precarious position.

The fact that so many humans are more worried about humans being lied to than deadly animal neglect is, I think, a symptom of how we under consider the experiences of our fellow earthlings.

(3) Several people have said that they feel that we should show compassion for the dog walker; after all, her life is now ruined because of an “accident.” I’m all for kind consideration even for the most vicious in our society; however, I think we must be clear on the terms of this compassion. This was not an accident. It was cruel act of negligence that any professional dog walker should have known was dangerous or at least painful for the creatures in her care. That’s not a simple error that anyone could make; it’s a crime of indifference.

Perhaps our society and justice system could use more compassion for its offenders, but so long as we live in a culture that demands justice from those who mistreat humans, I see no reason why we should not expect the same from those who tread so cavalierly on the experiences of animals.