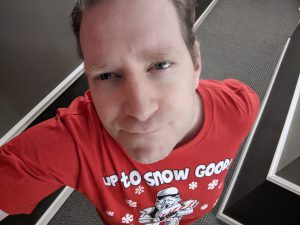 Disney and Lucasfilm recently announced that they would be producing a grand new collection of TV series and movies to expand the Star Wars universe beyond anything we fans could have possibly imagined. But Mark Hill, a satirical writer at The Beaverton, struck back at Disney’s “joyless” efforts, noting that:

“Media journalists predicted that most of the series would feature, holy crap can you believe it, lightsabers, incompetent Stormtroopers and, wait for it, spaceships. In response to this speculation, some dork on Reddit said ‘I hope we get to see some wurmpuses too,’ whatever in Christ’s name that means.”

Against my better biases, Hill’s profanity-led mocking of the expansion of our galaxy far, far away (as well as those of us cheering it on) got me chuckling like a Nien Nunb.

I even cheerfully paraphrased the article for my spouse on our nightly walk, and she laughed harder than I would have liked as Hill scoffed at us fans for buying:

“…clothes that say garbage like, ugh, ‘Reading my t-shirt, you are.’”

I’m tempted to point out that Mr. Hill’s comedy, while amusing, calls upon a rather redundant set of jokes that we Star Wars fans have heard throughout our history. Yes, Mark, many of us are,

“…excited dweeb”s, who get worked up “to witness the adventures of Luke Skywalker’s distant cousin, one of the aliens who’s on-screen for two seconds in A New Hope…” (intrigue me!) “…and the Millennium Falcon’s sentient space coffee maker” (right on!),

along with any other scraps of detail George Lucas’s acolytes are willing to toss our way.

However, because I don’t want to seem as humourless as Hill’s familiar caricature of Star Wars’ fans implies, I’m going to instead take the path of the Jedi and support Mr. Hill’s cranky work by publishing here a complementary piece from the magazine, The Curmudgeon.

NO HOPE by Oscar T. Grouch

Curmudgeons everywhere have had enough. Disney and Lucasfilm are expanding their already oversized Star Wars universe with plans to make a pathetic collection of unnecessary new content. Grumps are not pleased.

“Why are these damn kids doing this to us?” one leading grumbler asked.

“More Star Wars?” another said. “Great, now dweebs are going to be blathering on about it while I’m overpaying for my coffee.”

“We’re not happy about working with a bunch of hoity-toities,” one despondent crab explained, “but if you’re gonna take candy from a bunch of babies, you’re gonna need help distracting them first.”

“Exactly right,” a high-ranking member of the snob collective added, “this is not an ideal collaboration; but occasionally one must have an imperfect wine-pairing just to get through a meal.”

Leading this alliance of the snotty and the haughty is a rare dabbler in both groups, Mark Hill of The Beaverton.

With crotchety panache, Hill noted during the joint Snob & Crank depress conference that Disney is:

“Precisely,” an elite-aesthete said. “You can’t give consumers what they want. That’s pure consumerism.”

“Bravo!” cheered another. “We mustn’t let this derivative and jejune nonsense persist!”

Then a dorky journalist—dolled up with dweeby glasses and a horrid holiday tie—humiliated herself by asking the leaders of the snob collective if there was a contradiction in their criticism of Disney for being “joyless” at the same time that the mouse-eared regime seemed to be bringing so much “joy” to their fans.

“That’s not the joy we’re looking for, my dear,” Beatrice von Snooterson explained.

“I don’t know about any of that,” one of the top grumps replied. “All I know is they’ve already made so much garbage, which I’m already not gonna watch—why do they think I’m gonna wanna see this new pile of junk?”

Hill brilliantly responded to the high-ranking grouch’s question by sardonically explaining that—contrary to all recognized guidelines of good taste—dorky Star Wars fans are obsessed with studying the detailed motivations and back stories of every galactic character as though they’re studying Shakespeare’s canon.

That provoked a crescendo of chuckles among the snobs.

“Ha, ha, they’re all dweebs!” one of the curmudgeons added.

“Hear, hear!” a snob called out with an elevated eyebrow. “Why do they insist upon exploring every particular of their make-believe world? Are they under the misapprehension that it’s real?”

“I must concur,” another snooty-voiced elite replied. “Moreover, if Disney absolutely must produce more Star Wars, surely they can provide something a little more grim and challenging to watch. Give us a movie about how Luke Skywalker had an eating disorder, and how he used his laser sword to fend off anyone who tried to help him.”

“Indubitably!” called out a nearby avant-garde filmmaker. “Now that’s the sort of bleakness for which I’m looking!”

Sadly, despite these crusty and erudite calls for Disney to stop imposing their vapid product on their vapid audience, neither the provider nor that consumer of Star Wars has agreed to discontinue their relationship. And it looks like there is little hope that they will any time soon.

2 thoughts on “HOW THE GRINCH STOLE STAR WARS”