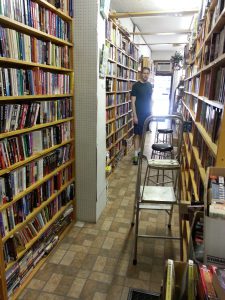 WARNING: The following entry features two seemingly unrelated babbles, but I hope they will come together in the end.

Part 1: THE BEST OF LANGUAGE

I have recently made a pact with myself to read the novels of Charles Dickens. I met him as a kid, when my dad read to me Great Expectations, which may have given me a false expectation of the writer since my dad, along with my mom who read books to my siblings and me, is one of the greatest readers aloud of books that history has ever known. Both of my parents provide pathos in their tone that enlivens the spirit of every character. My particular favourite was the lawyer with the thick fingers, Mr. Jaggers, to whom my dad’s voice delivered a confidence and intelligence that would have left Perry Mason jealous. I then read Hard Times in university (at the instruction of a professor), which I think must be one of Dickens’ few concise works, as it didn’t take long to get through. I recall it being humorous, in spite of its dark themes, but embarrassingly I don’t remember much about the story, so from it alone I still cannot claim to have verified Dickens’s greatness.

So, this year, I decided to take on A Tale of Two Cities, in part because it is so well introduced by Dr. Frasier Crane in the excellent sit-com, Cheers—

FRASIER (reading to his less literate bar buddies): “It was the best of times, it was the worst of times—“

CLIFF: Boy, this Dickens guy really liked to cover his butt, didn’t he?

—but also because I wanted to have the work read to me as an audiobook during my many free times on transit, and the audio version for A Tale of Two Cities was available at a good price on my local internet.

The book, I quickly discovered, would have been more appropriately given the label of “Hard Times,” both for its characters, and for its reader (listener), as there are many passages of description that baffled my mind. Upon two or three listenings of the bulkiest sections, however, I understood most of it, and whenever the characters spoke to each other, the story soared. Each person in the narrative has a distinct character (and voice provided by the amazing narrator, Peter Batchelor, who proves himself to be a worthy Dickens-reading understudy for my dad) as their lives mingle together with both the nuance of a true story and the unexpected turns of a mystery novel. Dickens’s puzzle pieces fit so well together in service to the grand story, and yet all of the characters act as autonomous beings, never wavering from their individual motivations.

The finale of the Tale arrived in my ears as I jogged the New Westminster sea wall; with a cool wind in my face, I was stunned as each of the characters collided into a perfect heart-palpitating conclusion. I was forced to come to the following determination: Charles Dickens is the greatest novelist whom I have met so far.

After the tale was done, I dialed up the audiobook store again, and selected David Copperfield because it was both selling at a good price, and because my new friend and narrator, Peter Batchelor, would be supplying his voice again.

I was warned, upon this choice, though, that I might find it to be aggravating because, in the novel, Dickens apparently spends much of his time telling stories from the past in the present tense. Uh oh.

Part 2: THE WORST OF LANGUAGE

I have been ranting (in my non-blog life) for a while now about the omnipresent usage of the present tense to describe events that happened in the past. I understand that, when telling a story, rendering it in the present tense can sometimes create the impression that the narrator and listener are experiencing it as it happens. However, the trend has turned to a requirement in the media. One of my two radio stations, CBC, insists on utilizing the present tense in all of its documentaries to the point that, when experts join the discussion to give their belated perspective on events, it is often confusing which parts of the discussion are current and which are past. Moreover, interviewers often don’t even give their witnesses the option of using the correct tense.

INTERVIEWER: So what are you thinking when you first see the dragon?

INTERVIEWER: And when do you realize that you’re dealing with a dragon?

SCIENTIST: Well, I’m talking to my colleague, Dr. Expert about it, and she says that rhinoceroses don’t breathe fire, and so I realize I’m onto something. My rival Bernie McSkeptic says it’s the greatest discovery of the 20th century.

INTERVIEWER: Bernie the dragon skeptic was there, too?

SCIENTIST: No, he just said that now on his Facebook page. He’s listening to this interview.

INTERVIEWER: Oh, I see, well let’s get back to the story. I understand you’re worried that your puppy is going to be eaten by the dragon?

SCIENTIST: Oh, yes, he chases the dragon initially, but he escapes, and I’m totally relieved.

SCIENTIST: But then he gets eaten a few minutes later.

INTERVIEWER: Oh, I thought he survives?

SCIENTIST: He does… initially. And then he gets eaten.

All right, that’s enough. I realize I may have exaggerated the point a wee bit here, but the fact is: often, when listening to stories on the radio, or in a television documentary, it can actually become confusing at various moments in an interview whether the speaker is describing their current thoughts on a past incident or their past thoughts as they happened in the then-present.

Thus, I have come to the following demand: all media should desist in wielding this tool completely because they are incapable of using it sparingly in particular incidences where they think it will bring specific tales extra significance. Instead, like underlining every word in a document, they use present tense storytelling almost exclusively, and so the technique has lost both its power and its clarity.

Conclusion: THE MAGIC OF DAVID COPPERFIELD or PAST TENSE

David Copperfield begins with the phrase, “I am born,” which sets the tone for a novel that, although it is told from the perspective of a time long passed its events, nevertheless dips into the memory of its protagonist, and so sometimes shares those memories from his perspective of re-living them.

Amazingly, though, ten chapters into this tale told in two tenses, not once has Dickens irritated me. The majority of the story is cheerfully described in the correct, past tense, but occasionally the narrator zooms in on a sequence and gives a verbal snapshot about what he was feeling at the time of the event. The result is never confusing, but always clearly delineated as an exception. I, as a reader (listener), always know when the storyteller is providing a close-up memory that he is feeling as though it is happening again in the present tense, and when he is panning out from the story and offering his long distance perspective of the past.

And so I am tempted to reverse my call for a ban on the present tense in past tense storytelling in the media. But not quite. Instead, I will now authorize the following middle ground: anyone in the media who possess something near Dickens’s skill may use the present tense for past descriptions. For future reference, all others must stop immediately.