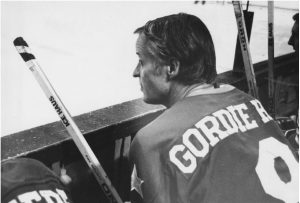 If you’re not a hockey fan, but want to impress a friend or enemy who is, try this sentence on for sizable reaction:

(A Gordie Howe hat trick is not simply a hat trick—three goals in a game—by Gordie Howe (a.ka. “Mr. Hockey”). Instead, Gordie’s trick is a bundle of three specific hockey behaviours, but not all goals, and like the standard trick, it can be completed by anyone. However, it was named after Mr. Howe because he seemed the most likely to achieve it, which is why it should seem odd to a hockey fan such as your friend or rival that Mr. Hockey managed only one in his lengthy tenure.)

Now your friend should not only be surprised to learn that Howe had only one Howe-style hat trick in his career, but also that this intriguing stat came from you, someone we established earlier is not an aficiando of their favourite game.

So here comes the experimental part. Your Sethblogs predicts that—even if you still haven’t guessed exactly what a Gordie Howe hat trick is—you shouldn’t need the definition in your conversation with your hockey friend or foe because we think they’ll assume that anyone capable of the expression must know its meaning.

Instead, then, SethBlogs suggests that most fun will be had if you play expression roulette with the phrase, and try it out with your hockey friend or foe without looking it up in advance. If you do so, you’ll achieve your own hat trick:

(2) You’ll show courage against the possibility that—against Sethblogs’ prognostication—your friend does inquire as to what you think the expression means; and

(3) you’ll entertain SethBlogs when you report your findings back to us!

Thank you for your attention to this daring endeavour.

In the meantime, for a look at Mr. Hockey in action, consider this footage from a 1979 contest between Moscow Dynamo and the WHA all-stars, which included 50 year-old Gordie, his son Marty, and a 17 year-old apprentice to Gordie’s scoring records.