In the face of difficult questions, the most talented egos use impeccable sleights of language to rebrand their behaviours to seem heroic. This series is dedicated to those rhetorician-magicians.

I: NEVER LET THEM SEE YOU CARE

II: IF YOUR CRITICS DON’T BELIEVE IN YOU, NO ONE WILL

V: HUMILTY IS AS HUMILTY DOES

VI: HOW TO AVOID QUESTIONS AND INFLUENCE PEOPLE 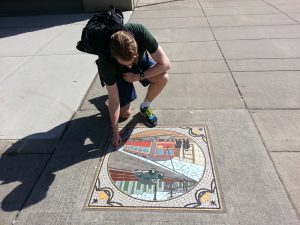 On CBC radio’s Q with Jian Ghomeshi, I find that the host’s brand of cheerful, introspective inquisition usually succeeds in bringing out the non-pretentious side of his guests; however, in a recent Q leading up to the London Olympics, Jian interviewed the billboard brandal, Scottish poet, Robert Montgomery, who fought through the host’s friendliness and managed an impressive level of condescension.

Montgomery’s “brandalism” project—that of superimposing his poetry, along with other art, over billboards (including recent Olympic advertising)—is interesting; as he says, cities decorated on all sides by commercial imagery could be exhausting to the psyches of the inhabitants, and so many city dwellers may prefer a quiet poetry break. Nevertheless, I was intrigued to hear how the poet would tackle the notion that the places on which he places his wares have already been paid for by law-abiding citizens. Montgomery’s personal preference for his ideas over corporate products sounds lovely in theory, but what gives him the right to overrule the message of the legal tenants of the space?

I mean the question sincerely. As anyone who’s ever taken a philosophy of law course knows, Martin Luther King Jr. argued—while he was in jail—that some laws are in such violation of human dignity that they should not be considered valid. That’s compelling to me, so I was ready to be persuaded that Montgomery’s brandalism is confronting an oppression that the corporations have no right to inflict upon us.

Yet, instead of making any attempt to suggest the intrinsic immorality of the original billboards, Ghomeshi’s guest simply explained that most people seem to enjoy the respite from the noise of commercialism. Is that really all the argument that’s required to overrule the law? That people would prefer it? I’m sure most people would also rather go without parking tickets, so should we tear them up if we get them?

Presumably the proceeds from billboards go to the city (or at least the economy), which can then pay for infrastructure for the citizens. I’m happy to hear an argument that the billboards are nevertheless immoral and so must be fought, but Montgomery’s follow-up defence that he is providing his fellow humans with a kind of therapy is wholly insufficient, and incredibly paternalistic. Despite his poetic pedigree, I’m not convinced that he’s necessarily equipped to provide such collective psychological treatment.

All of this I would have forgiven were it not for his hubris-riddled anecdote in which he described being caught in the act of brandalism by a police officer, who, happily enough, said he enjoyed the poetry and told our hero to carry on.

“Not all police officers are stupid,” the poet concluded.

So, along with providing therapy, Montgomery’s poetry has the ability to test the intelligence of its readers? If you “get it,” you’re smart; if not, sorry, you’re not too bright.

(Moreover, whether or not the officer was smart, since when are individual members of the police supposed to ignore the law because they happen to like the sentiments expressed by the criminal?)

I am more than happy to be persuaded that brandalism is a worthwhile enterprise, but I think Q should consider bringing on a defender who can see far enough past their own ego to be capable of taking on the genuine question at stake here: when is it okay to forsake the law for what you perceive to be the greater good?

I: NEVER LET THEM SEE YOU CARE

II: IF YOUR CRITICS DON’T BELIEVE IN YOU, NO ONE WILL

V: HUMILTY IS AS HUMILTY DOES

VI: HOW TO AVOID QUESTIONS AND INFLUENCE PEOPLE